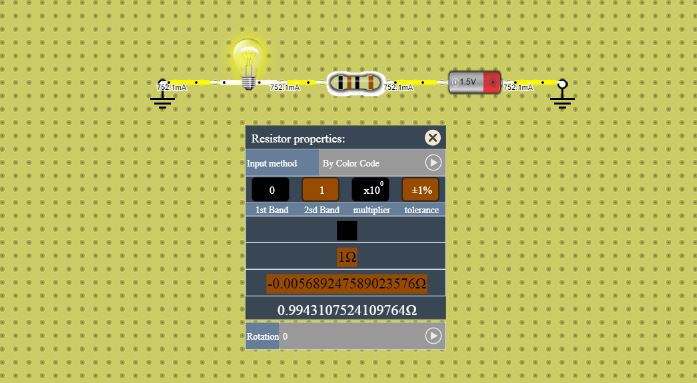 Follow the simple steps below in order to use the resistance in your circuit as per your application.

Steps to use Resistance in Lab

Step 1: Navigate through the list of the devices/components in the above and locate the symbol of Resistance as shown in the snapshot below.

Step 2: Click on the icon of the Resistance as shown in the screenshot above or grab the icon, a resistance will appear on the below board.

Step 3: Connect the resistance in the circuit and set its value as per your application.

Controlling the properties of the Resistor

When you are working with a circuit click on the resistor and a Gear shape will be displayed near to the resistance as shown in the image below.

Click on the gear icon shown in the above screenshot and a box with resistor property will show up as shown in the screen shot below.

There is an option in the properties labeled as “Input Method” here are two options to select. You can select either options from “By color Code” or “By text“.

In the above screenshot the color with its corresponding value for the first as well as second band is shown which has the range from 0 to 9.

In the above screenshot the color and its corresponding value for the tolerance of the resistance is shown. The range of the tolerance is from (+ & -) 1% to (+ & -) 20%.

In the above snapshot shown the two resistances of 1 Ω and 3Ω are connected in parallel. The Battery is connected as a power source which have 1.5V and 2.007A of voltage and current respectively.

We know that the voltage is the same across the parallel loads/devices, hence both the resistors would be having same voltage of 1.5V. However the current is divided in between the resistors as per their value.

where, I = current, V = voltage and R = Resistance

with the help of the above expression we can calculate the current across the two 1 Ω and 3Ω resistors.

As shown in the screen shot above we can get a basic idea that the less error factor we have (which is near to zero) the more precise value of the resistance in practical we will get.

The D represents the ideal condition in which the resistance is of exact value which we need in our application.

Note : The D condition in which the resistance has an ideal value does not exist in real life. We can use this feature in the lab in order to check the accuracy of our circuit. 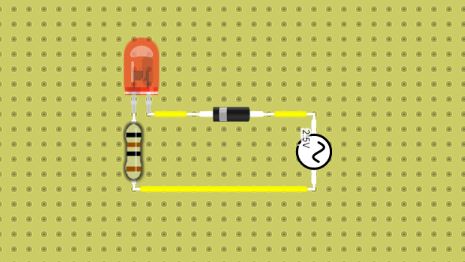 How to use diodes in Lab

How to use switches in Lab 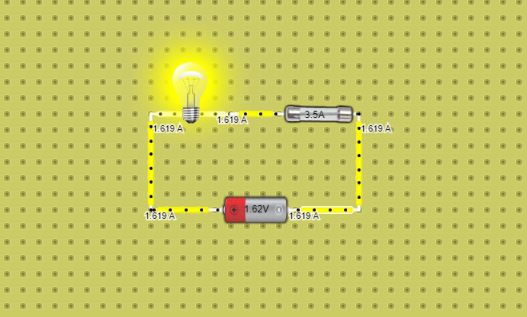 How to use Fuse in Lab